This week has been a tough one. Just days after having Nicole’s death confirmed, we learned that our friend John had also died.

John was a genuine kind of guy. A couple of years ago he was quite a constant presence at The Dale. He was going through a very difficult time, and would come into our Monday drop-in to talk things out. He was very open about the depth of his pain, and also about his appreciation of our community. He and his partner at the time were known to describe The Dale as a place to come and “get your calm on”. This made and makes me really happy.

Over the last few years John had been doing better, and we didn’t see him quite so much. When I did see him on the street he would always stop, ask how I was, beam his smile at me, and when we were parting ways he would almost always say, “take it eeeeeeasy.” He had a way of making me feel that taking it easy may actually be possible… If he could, then I could too.

I’m really going to miss seeing John around the neighbourhood. And I’m glad that he was able to get out to the east coast to be with his family before he passed away.

John, may you deeply enjoy taking it eeeeeeasy, from now on. 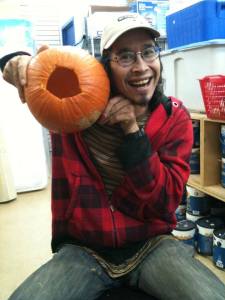