Erinn has been off for most of August, so being at The Dale has been extra adventuresome, but mostly really good. Various friends have stepped in to offer some extra support during drop-ins and on Sundays, for which I am very grateful. The community has also done a great job of offering to support to one another, which has been beautiful to see. Next week The Dale will be closed, and I will endeavor to limit my adventures to the local variety, in hopes of getting some solid rest 🙂

There have been lots of poignant moments in the last few weeks, but I want to share one with you in particular:

Being the only staff person “on duty” means that I do some of the things that Erinn would normally do, including picking up bread, wine and juice for communion. Last week I was also on duty to pick up bread for communion at Sanctuary, so after a trip to the LCBO and a grocery store I found myself holding a bottle of port and two big loaves of bread, thinking about how to get them into my bike saddle bags.

My arms were very full, and it suddenly occurred to me that I was, in some real way, embracing Jesus. It was such a beautiful moment! I realized what a gift it is that God knows how much tangibility means to us humans, and has always given us physical ways to relate to the intangible divine reality. From the many feasts, sacrifices and rituals of the Hebrew people, to the mystery of the Incarnation, to the Lord’s Supper, God has been making God’s self accessible to us in ways that we can touch, smell and even taste.

What a precious thing! As we seek to see with Jesus’ eyes, speak with Jesus’ voice, embrace with Jesus’ arms and walk where Jesus’ feet would go, we also get to connect with him in a tangible way when we share the meal that he shared with his friends. We do this every Sunday at The Dale, and it is always a beautiful few minutes in the midst of what can be a chaotic week.

Thanks be to the One who knows us so well, and continually makes himself known to us. 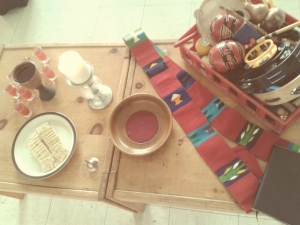