This Saturday will be the one year anniversary of our friend Cowboy’s passing. In some ways it’s still hard to believe he’s gone, and in other ways it feels like a long time since last July 23rd.

Part of the reason that it feels SO long since Cowboy died is that we’ve lost so many others since last summer. We’ve held six memorials/funerals including Cowboy’s, and lost four other friends for whom other arrangements were made.

Erinn was tidying up one of our storage spaces the other day, and came across this card that Cowboy was never able to receive…from Will, a friend who died less than 6 months after his pal. Erinn and I both got teary, and realized that this image totally captures the hope, humour, love and grief that our community has experienced these last 12 months: 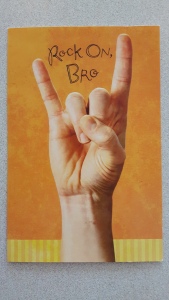 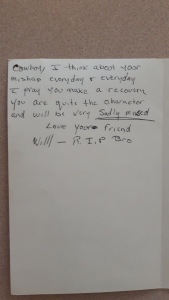 In the midst of the sadness of this year there have also been many, many joyful moments. We’ve celebrated a baptism, seen people housed, and shared many meals, hugs, and good conversations.

And we miss our friends; we’ll be marking a lot of first anniversaries this year. As we grieve, we will also urgently yearn for the day when death is swallowed up in Life. Lord come quickly.